"Everyone who acknowledges me before others
I will acknowledge before my heavenly Father."
(Mt 10:32) 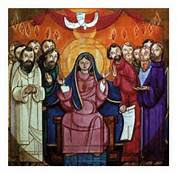 If I am part of the 25% of baptized Catholics who worship the Lord weekly, how can I help the Church move from maintenance mode into a "permanent state of mission" (Pope Francis)?

Jesus clearly expects me not only to respond to his universal call to holiness, but also to contribute to the universal call to mission, and here are five ways I can make become part of the solution:
May our Mother Mary, Star of the New Evangelization, make us fit instruments in the hand of the Holy Spirit, witnesses of her divine Son, and apostolic souls who will help lead our brothers and sisters back to communion with the Father of Mercy!
Posted by Unknown at 5:23 PM

In an effort to focus on our fundamental "freedom for mission", the U.S. Bishops are again challenging Catholics across the country to embrace a fortnight of prayer, fasting and study.

Fourteen days may seem like a long time to address what should be an obvious freedom for Americans, but real threats require real resistance. One problem with current attacks on religious liberty is that they clothe themselves under the mantle of "justice."  Indeed, the prevailing secular orthodoxy often seeks to diminish and restrict this "first freedom" precisely in the name of freedom--shaming and silencing religious believers under the guise of preserving freedom from alleged "hate speech" or "bigotry."

However, followers of Jesus Christ don't discriminate; they just disagree with the myths and truth claims being propagated by opponents of religious liberty.

As we advocate for a renewed freedom for mission, maybe we should start by acknowledging that  "evangelical atheists" are actually promoting a meta-narrative about the human person and about the meaning of life.  This new quasi-religious world view stands in stark contrast with a Christian world view, and the simple act of naming it as such could lead to potentially fruitful conversations about authentic pluralism.  We might even be able to invite people to consider how respectful "coexistence" would differ from coerced compliance.

The identity of the human person and the destiny of the human family is at stake, so let's pray that the Holy Spirit will animate the national convocation on The Joy of the Gospel in America with a renewed missionary mandate.

And let's each make some small effort in the two weeks ahead to help promote authentic human freedom: As the Lord said following the healing of a boy afflicted with a mute and deaf spirit, "This kind can only come out through prayer" (Mk 9:29)!
Posted by Unknown at 1:28 PM