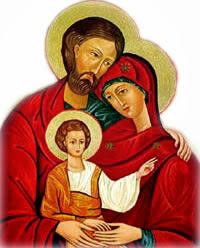 One of my best friends regularly reads these reflections, gives me periodic feedback, and often forwards them to others.  But he recently admitted that, "When I see Everyday Evangelization in my email, my first thought is, 'Oh, no, here comes Dave telling me something else I should be working on'."  Ouch!

If these reflections ever strike you that way, please accept my apologies!  A quote from Flannery O'Connor captures my experience of blogging: She said, "I write because I don't know what I think until I read what I say." These postings have been a helpful way for me to work out some things for own faith journey, and I hope an invitation for you to find ways to become an "everyday evangelizer" in your journey.

So please take the "three thoughts" below in this spirit.  These are areas which have been helpful for my own family--and which we continue to work on.  Thanks to one of the wonderful Nashville Dominican Sisters who invited me to speak to her school families on the topic, I was forced to think about what advice I'd give about family life.  Here it is:

One Family in Mission 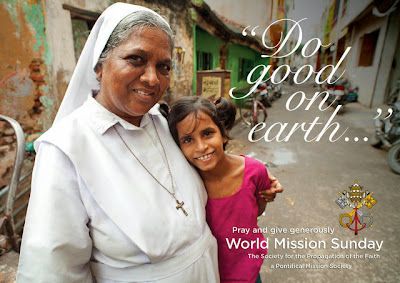 Don't you love the image of being part of "one family in mission"?  It's a place belonging, with a purpose; it's a chance to be mission-driven, without having to drive alone.

This theme serves as the guiding vision, as well as the web address (www.onefamilyinmission.org), for the Pontifical Mission Societies in the U.S.  Maybe you already know of their wonderful work.  Or maybe you heard this phrase or recently saw the poster above, since the Church dedicates the third Sunday of October to the theme.

Ultimately, the question of World Mission Sunday is a question about Jesus:  Is he still relevant and necessary?  Does he really need to be the center of people's lives--of my life?  And is there any other way to bring the authentic Peace and Joy and Hope for which the human person longs?  Is there any other fully-human answer to life's ultimate questions--why are we here, what's the purpose of my life, and how can I experience true love? 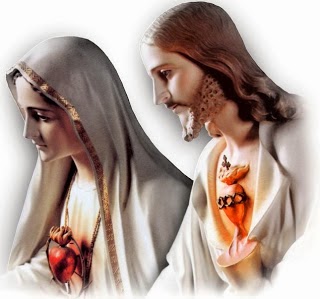 As part of my mother's birthday extravaganza this summer, my sister-in-law had neon orange t-shirts made, with "Rettapalooza" emblazoned on the front.  (Retta is what the grand kids call our dear Loretta June.)  As our entire clan was shuffling through the airport wearing the t-shirts, someone approached my witty wife and asked, "What is Rettapalooza?"  Without breaking stride, Tracy responded, "It's a movement!"

On Sunday, October 13th, Pope Francis consecrated the entire world to the Immaculate Heart of Mary.  Around the world--including in the Diocese of Joliet--countless Bishops consecrated their dioceses to the Immaculate Heart as well.  I was reminded, once again, that the Church is not some arcane institution:  It's a movement.  Moreover, it's a movement big enough to wrap its arms around the whole world.

For those who have been "reading" Pope Francis as a Holy Father intent on breaking from tradition and leading the Church down a radically new path, this day of consecration must have been befuddling.  After all, if Francis is just reaffirming the common secular virtues of our day (e.g., tolerance, empathy, simple living, etc.), such traditional piety must seem unnecessary or irrelevant.

But what if Pope Francis is best understood in terms of creative continuity with the great tradition of the Church, rather than discontinuity?  What if our temptation to resort to worldly labels--such as, liberal or conservative, progressive or traditionalist--simply don't fit?  Another way to put it is to ask whether our new Holy Father is best understood not in terms of an either/or, but a both/and.  As the Gospel puts it, what if “every scribe who has been instructed in the kingdom of heaven is like the head of a household who brings from his storeroom both the new and the old” (Mt 13:52)? 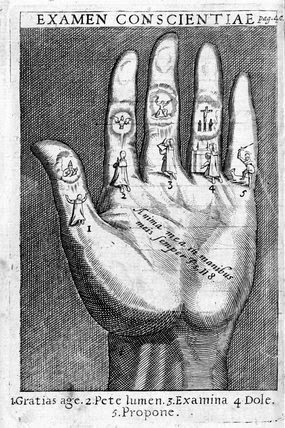 "All the way
to heaven
is heaven,
because Jesus said,
"I am the Way."
+ St. Catherine
of Siena

The kingdom of heaven proclaimed by Jesus has very little to do with the "somewhere, over the rainbow" perspective which we so often defines conventional wisdom about heaven.  In fact, the Gospels recount over and over again the NOW of eternal life:  It is today; it is this present moment. It is among us; it is at hand.

And this NOW reaches out to each of us each day, as the Risen Lord quietly asks, "But who do you say that I am?"  He invites us to become more alert to--more conscious of--the signs of the kingdom of heaven in our midst.

The question of "being prepared" is first and foremost not a matter of trying to make it to heaven after we die, but it is about embracing the gift of God's life in our hearts--right now.  It is a question of whether we will see the face of Christ in those with whom we live and move and have our being--today.  It is a question of whether we will listen for the still, small voice of the Lord, who whispers words of affection in our hearts--from moment to moment.

But if your life is like mine, it might not always seem so heavenly.  The rush of activity, the frantic pace of post-modern life, or the crush of daily duties can leave us feeling like little grapes in the proverbial wine press.  Perhaps even in such experiences, however, we can still catch a glimpse of the kingdom of heaven.  After all, though the Lord wants to transform us from mere grapes off the vine into the finest of wine.  The idea of God "writing straight with crooked lines" suggests that the Lord finds a way to use the prodding and poking and pressing of our daily difficulties to turn us into the priceless vintage we were created to be.  Here and now.