Behold the Lamb of God 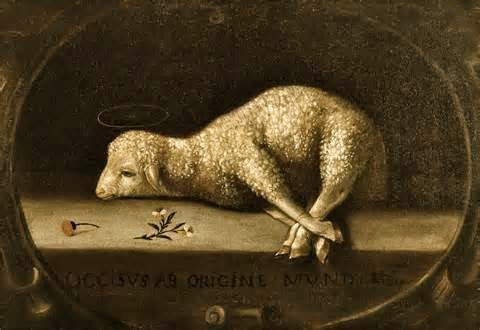 As we (re)enter into Jerusalem with Jesus and his closest disciples for the Triduum, the three days celebrated as one, let's keep our eyes fixed upon the Lamb.  For, wherever it flows, the blood of the Lamb brings wholeness and holiness, authentic liberty and liberation.

After all, God's chosen people had been freed from slavery and death by marking their homes with the blood of a lamb.  For centuries thereafter, they had commemorated this event by sacrificing a Passover lamb and eating its flesh.  The lamb represented their powerless plight in the face of abject suffering; its blood was a sign of the intimate bond between God and the Israelites.  It was as if the Lord of hosts wanted innocent blood to flow once again through his people.

Within this covenantal context, at their final Passover meal together, Jesus offers his disciples the interpretive key which will unlock the next day's mysterious gift of his innocent life:

Moving forward, there will be no more animal sacrifices in the Temple for the followers of Jesus.  Rather, following his command, they will consume the flesh of the Lamb of God and will mark the members of his new covenant with his blood.

There seems to be a "zero tolerance" policy regarding use of the "N" word in the U.S. these days.  The effective ban on this word seems appropriate given malingering racial tensions and tragic explosions of violence in recent months, not to mention an all-too real racism which still exists in the minds and hearts of many.

There is another "N" word, however, whose use seems to be drawing much less attention.  Indeed,  there seems to be a general indifference in the U.S. toward scores of people in the Middle East who are effectively being branded with a scarlet letter "N", then persecuted and slaughtered.  As has been widely reported, the fascist Islamic State has been marking the homes of Christians with the Arabic letter "N", to identify them as followers the "Nazarene."

According to St. Jerome's commentary on the Matthew 2:23 reference, the title "Nazarene" fulfills no one isolated prophecy about Jesus, but rather it points to the general testimony of the prophets that the Messiah would be despised.  So, is it ironic--or prophetic--that ISIS is helping to fulfill this prophecy even now?  After all, as the Risen Christ made clear to Saul on the road to Damascus some twenty centuries ago, he is present in his followers: "I am Jesus, whom you are persecuting" (Acts 9:5).

Moreover, perhaps it is time to ask whether it is ironic--or prophetic--that radical secularism wants to stand by indifferently, even in the face of this effort to eliminate the despised Christians in the Middle East.  After all, though secular fundamentalism claims to propose "tolerance" as one of its highest values, it seems to be rushing toward a "zero tolerance" policy for religious people, particularly Christians.

Religion is accused of being the source of tensions and evils in the world, and Christians are accused of being as violent as anyone else (despite facts to the contrary regarding religion and violence); meanwhile, radical secularism demonstrates an ever-greater tolerance for sacrificing the lives of the weakest in the name of some alleged "greater good."  The innocent by-standers of drone bombings, the unborn and the elderly, migrants fleeing political and economic anarchy, incarcerated felons:  For radical secularism, sometimes those who are most vulnerable need to die, in order that the strong can continue to thrive.

And Christians seem to be increasingly expendable, unless they too are willing to profess such a vision of "social progress."

So, given this state of affairs, would you mark yourself publicly with the sign of the Nazarene? 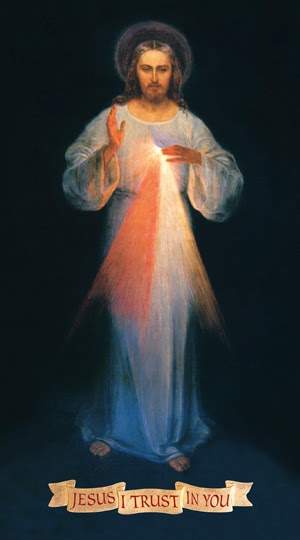 It's almost axiomatic: No one is perfect.  And, as we like to say in my family, everyone needs a fresh start from time to time.


However, when Jesus reveals his Father as our merciful Father, people of all stripes rush to condemn him, crying out "Crucify him, crucify him!"  The Divine Mercy which we claim to need somehow seems threatening and even repulsive.﻿  So what prevents us from accepting the gift of God's love?

There seem to be at least four main attitudes designed to mire us in our present state:
Read more »
Posted by Unknown at 6:34 PM

Preparing for the Passion 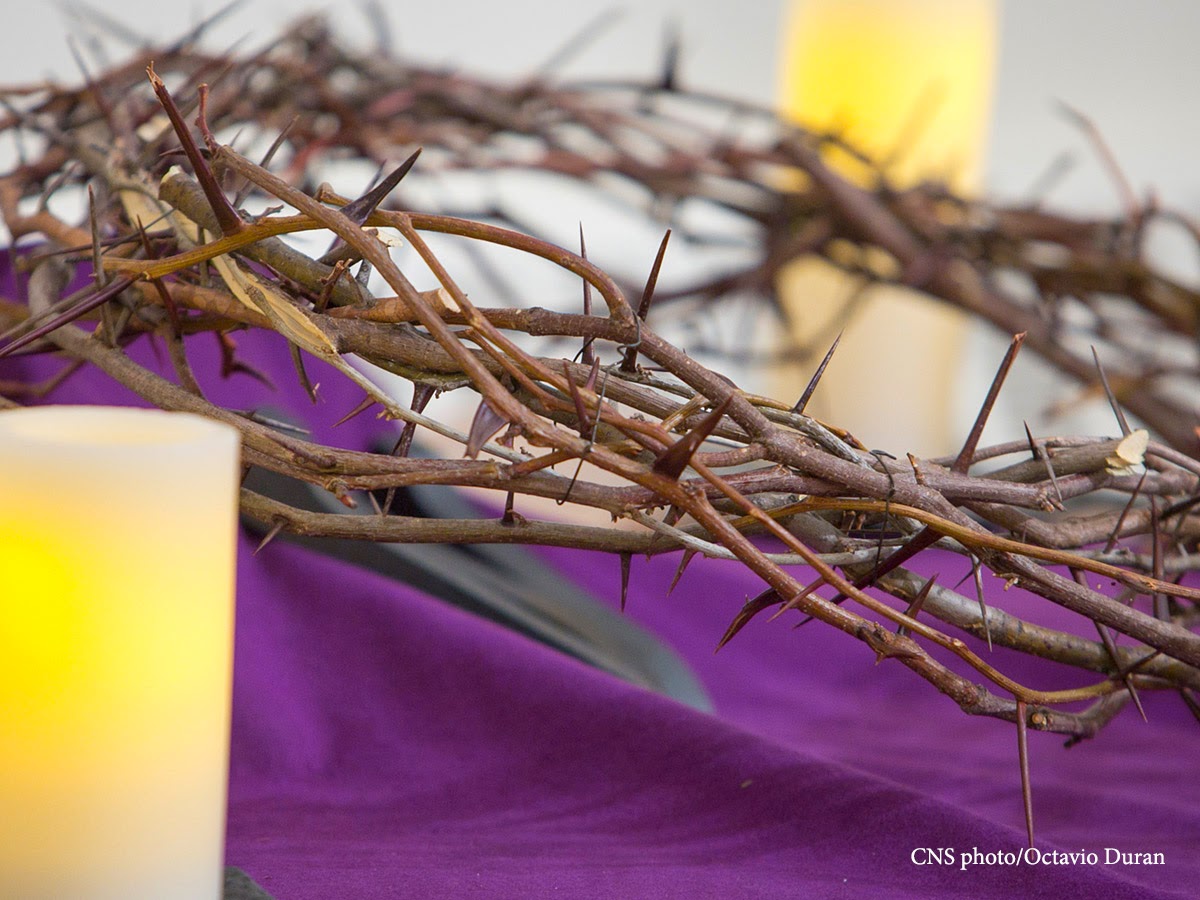 For many Christians around the world, the opportunity to identify with the crucified Christ will arrive today--at the hands of barbaric jihadists.  Some of these modern-day martyrs will be torn away from their family and friends; many will be mocked, stripped, and/or tortured.  All will take up their cross, along with their crown.

For the rest of the mystical body of Christ around the world, ongoing questions will persist regarding how best to stand in solidarity with these brothers and sisters.  Though we may not be called to such a heroic and bloody witness, wherever followers of Jesus live and work,  this pointed spiritual question remains:  Am I willing to climb Calvary in solidarity with all those who are forced to do so?  Am I ready to journey once again to Jerusalem with our Lord?

There are many ways to envision such spiritual solidarity, but here are a few possibilities to consider: 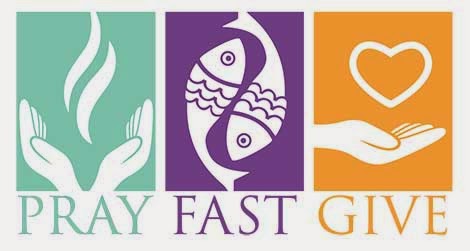 Are you still loving Lent, or does it feel like the honeymoon is over?  Maybe it's just me, but from Ash Wednesday through the first week of Lent, I seem to have a natural burst of enthusiasm for my Lenten promises.  Then the reality sets in!
It seems like 14 days would be much more reasonable than 40--and I try to convince myself that I would be much better at maintaining my Lenten discipline if only I could tinker with the timeline a bit :)  After all, this year I started Lent with a firm commitment to pray, fast and give more intentionally, more meaningfully, but maybe I like the sprint more than the marathon.

But therein lies the problem.  As we enter the second week of Lent, I find myself left once again with myself at the center, trying to mold Lent to suit my own perceived needs.  So, what if I de-centralized myself this Lent?  What if I shifted my attention from my Lenten promises and my enthusiasm for this season of renewal (or lack thereof), back to the rightful focus of this season--the transforming work of the Lord?

In other words, what if I really allowed the Holy Spirit to help change the way I pray, fast and give? Today and for the rest of Lent and beyond.  Regardless of how "successful" it may be, am I really looking for just another self-help experience this Lent?  Or am I ready to let the Lord use this season for his purposes?
Read more »
Posted by Unknown at 7:44 AM