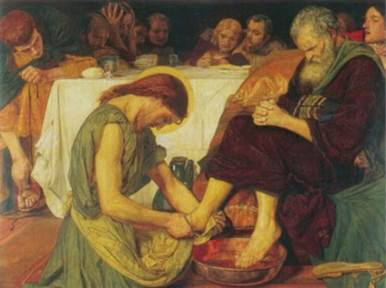 When you think of this most meaningful "as" ever uttered, what scene or scenes come to mind?


As...he called us his friends.

As...he preached a mountainside sermon
and lived a life which turned the world right-side up.
As..he reclaimed all the lost and marginalized,
like so many lepers and tax collectors and prostitutes.

As...he fed thousands and gave himself as the Bread of Life.

As...he revealed that we were no longer orphans,
but gave us his Father as our Father.

As...he forgave those who torture and murder him.

As...he poured out his own heart and Spirit onto his disciples.

Jesus' "as" involves both a modeling and an empowering: The gift of his example is not some isolated and untouchable way of life precisely because his grace enables his disciples to turn the ideal into the real. This is the only explanation for the saints through the centuries who have loved as he loved, in a myriad of different situations and places.

In the thirteenth chapter of John's Gospel, Jesus' "as" is preceded by the striking scene of the footwashing. This dramatic gesture speaks of the "as" in terms of Jesus love for us precisely in our vulnerability, through our lack of understanding, despite our protests and prideful pleas to have the Master love us only on our terms.

What follows is a thought experiment,
based on Hans Christian Anderson's The Emperor's New Clothes.
Feel free to review the original,
and then check out how many parallels seem to fit our current situation....

There once was an empire so enamored of sex that it spent most of its time and energy on the topic. Those in power talked little about poverty, concern for the most vulnerable, or promoting the common good. They had a revolutionary sexual topic available for every hour of the day, and instead of saying that their business was holding fast to the self-evident truths of their constitution, they preferred to describe themselves as transitioning into a new vision of the human person.

In this land, life was all about freedom and equality.  One year, however, sex and gender bullies rose up throughout the land in the form of social and cultural elites--influential entertainers and athletes, powerful corporations and institutions, as well as the university intelligentsia. They presented themselves as experts on sex and gender, and they said that they could create the most magnificent array of sexes and genders ever known to the human race.

"Our multiplicity of sexes and genders will liberate people from the binary constrictions of 'male' and 'female'," claimed these power brokers. They asked, "Who could be opposed to such freedom and equality?" Moreover, they convinced the leaders of the land that these new sexes and genders had a wonderful quality of being recognizable only by those who were worthy of their current station in life, and establishing whether or not a person is intelligent.

The political leaders realized that these new claims about sex and gender would help distract the people of the empire from the fact that so many of their fellow citizens were being neglected, disenfranchised, and marginalized. They also said to themselves, "If we impose these new sexes and genders in our land, we will be able to tell who is worthy of their current social and economic standing, and we will be able to tell those who are intelligent from those who are ignorant."

So the empire's political leaders re-branded the sex and gender bullies as "Freedom Enforcers," or FEs, and encouraged them to get to work at once imposing new sexes and genders throughout the land. These FEs recruited doctors and lawyers and social scientists to the cause, and they pretended to be researching incredible new discoveries. They began to use the schools and public institutions as laboratories for their expanding lists of sexes and genders.

In response to those who disagreed with their truth claims, they threatened boycotts and branded their opponents bigots for maintaining that the human race exists in only two sexes. They droned on about equality and civil liberties whenever someone mentioned the physiological and chromosonal differences between men and women, let alone the sociological importance of both mothers and fathers.

"We would like to ask when the work of the FEs will be finished," the empire's political leaders thought to themselves after some time had passed. But they hesitated to inquire since they remembered that the new multiplicity of sexes and genders had the power to reveal whether people were worthy of their station in life--and whether they were intelligent or ignorant. So they decided to send representatives to ask whether the transitioning program was almost complete.
Read more »
Posted by Unknown at 10:45 AM

How to Enter Into "The Joy of Love"

Although these may be some of the common reactions to the much anticipated publishing of Pope Francis' major teaching on marriage and the family, perhaps we should begin with the essential question of how best to approach the text. The Holy Father himself suggests the following:


"I do not recommend a rushed reading of the text.
The greatest benefit...will come if each part is read patiently and carefully..." (AL, n. 7)

From the inevitably rushed reading presented by much of the media, the message seems to be: no changes on the hot-button issues of the day (yet?!); more freedom of conscience (than before?!). But, if this is the case, then why does Pope Francis take 250 pages to tell us what the Catechism already says?  The Catechism clearly outlines teachings on marriage and family, and it also spends 26 paragraphs describing the fundamental role of conscience (starting with Vatican II's statement that "Deep within his conscience man discovers a law which he has not laid upon himself but which he must obey..." [n. 1776 ff.]).

So what is Pope Francis up to in "The Joy of Love"?  Without having had time to dive in deeply, it seems to me that Pope Francis has offered us a rich resource for ongoing conscience formation.  Or perhaps for the re-formation of our consciences.

In other words, I think the best way to enter into this magisterial text is with an eye to how the Holy Spirit is stretching me personally to grow and change--to better conform myself to the law "which I have not laid upon myself."  This might be toward deeper doctrinal understanding; it might be toward more Christ-centered pastoral sensitivities.  It might be toward bold new perspectives which differ from what the world continues to impose on people's consciences.

"Then He opened their minds to understand the Scriptures"


Jesus' Resurrection fulfills God's ultimate promise. Yet the apostles and disciples needed multiple tutorials from the Risen Lord before He could open their minds to the fact that "everything written about me in the law of Moses and in the prophets and psalms must be fulfilled" (Lk 24:44).

The Hebrew Scriptures had prepared the Chosen People for a suffering servant who would redeem the people. According to Jesus himself, the Scriptures predicted that the Messiah would suffer and rise from the dead on the third day. He predicted his own passion, death and resurrection at least three separate occasions in the Gospels. Yet, Jesus needed to continually greet his inner circle with "Do not be afraid" or "Peace be with you" throughout the 40 days that he appeared to them before the Ascension.

How about Holy Mary, Mother of God? Tradition has it that Jesus first appeared to his Blessed Mother on Easter Sunday.  Despite the sword which pierced her heart on Good Friday, the Church holds up Our Lady's faith as a flickering light which was not extinguished even amid the utter darkness of Holy Saturday.

Is it possible that the Blessed Mother and her Divine Son discussed this Paschal Mystery as they prayed the psalms together throughout Jesus' teenage years and into his 20s? Perhaps there would be points when their eyes would meet, and Mary's heart would begin to ache.  Maybe Jesus even took some time to help open the Scriptures for his first and most faithful disciple.

Here are a few of the Psalms lifted up by the Church throughout the octave of Easter; imagine Jesus and Mary pondering these in their daily evening prayer: