With the U.S. Conference of Catholic Bishops decrying new immigrant deportation raids, many people are still not quite clear why the Catholic Church is so focused on migrants and refugees.

Public authorities certainly have the responsibility for regulating immigration but, as the Catechism notes, this responsibility is always subordinate to the duty to welcome those who seek security and an opportunity to support their families. So, here are seven reasons why Catholics care so much about the immigration question:

1. Members of the Holy Family were themselves migrants, as were most of our ancestors.

2.  Pope Francis says that he is "the pastor of a Church without frontiers, a Church which considers herself mother to all" (EG, n. 210).


3.  Stephen Colbert thinks its better to take a stand than to try taking a farm worker's job. (It's timeless and timely Congressional testimony from 2010, in response to the United Farm Workers' "Take Our Jobs" campaign.)

Dictatorship of Relativism or Lordship of Jesus Christ? 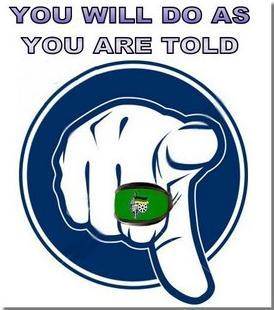 Perhaps we should be grateful that the choice for or against Jesus is becoming so painfully clear.  Christians can no longer play the all-too-comfortable game of compromise with the culture, unless they are willing to be complicit with the the forces of radical secularism and ultimately subservient to the hegemony of the day.

In 2005, on the eve of his election as pope, Cardinal Joseph Ratzinger identified the new totalitarianism of our times by coining the phrase "dictatorship of relativism." Ratzinger's homily to the Cardinals gathered in conclave offered the following insight: “We are moving toward a dictatorship of relativism which does not recognize anything as for certain and which has as its highest goal one’s own ego and one’s own desires.” Pope Francis would subsequently reaffirm the concern shortly after his election as pope in 2013, and he has frequently decried the spiritual poverty of the so-called developed world.

Under the dictatorship of relativism, illogical as it is, the only self-evident truth is that there are no self-evident truths. Absent truths which we recognize as self-evident, those who wield power quickly begin to dictate what is right and true--under the guise of "tolerance," of course:
Blind faith in unreasonable claims is required--lest one be branded a bigot. Public funding is wielded like a weapon, and cultural bullies threaten the reputations and livelihoods of those who attempt to resist.  In addition, as Ratzinger had noted regarding this dictatorship, the ultimate good of the human person is reduced to pursuit of one's egotistical desires: If I want it, therefore I have a right to it; if I feel it, therefore I must act on it.

Is it any wonder that emptiness and meaninglessness haunt the culture in which we live?

Under the Lordship of Jesus Christ, on the other hand, there is an authentic respect for reality which is understood a gift that is meant to be received.  Faith is not blind, but is eminently reasonable.  And Trinitarian Love inspires the deeper the logic of the Christian way of life--it fosters self-giving, not taking, self-emptying, not consuming, self-sacrificing, not self-aggrandizing.

Among the many promises which the Lord Jesus makes and fulfills are the following:

Waiting on a Bonaventure

"The papacy and the central structures of the universal Church
also need to hear the call to pastoral conversion....
Excessive centralization, rather than proving helpful,
complicates the Church's life and her missionary outreach." 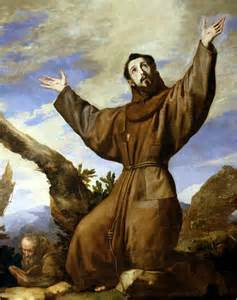 When both Democratic and Republican politicians cite Pope Francis as one of the most influential people in their lives--and when they concur that he is the most respected leader on the face of the earth--is it a sign of the end times?

In confused and confusing times, the Bishop of Rome seems to be simultaneously a polarizing and a unifying force.  His unwavering commitment to the basic truths of the Gospel and his restless desire to stretch people out of their comfort zones continue to move forward, like intricately intertwined forces for transformation.

From his call for a pastoral and missionary conversion of the Church at the start of his papacy (see the sample passage above), through his expansive environmental encyclical; from his wide-ranging document on "Love in the Family," through the recent announcement of a commission to explore the question of female deacons, questions abound regarding where Pope Francis is leading the Church and the world.

No recent pope has spoken more frequently and more earnestly about the real spiritual challenges posed by the Devil.  Pope Francis is not naive about the Father of Lies, that master of disunity and disharmony and disintegration.  But Pope Francis' response has not been a defensive hunkering down; rather, he has gone on the offensive in an effort to stretch the Both/And of Catholicism.  For example:

The Best Spirit for Waiting on the Holy Spirit 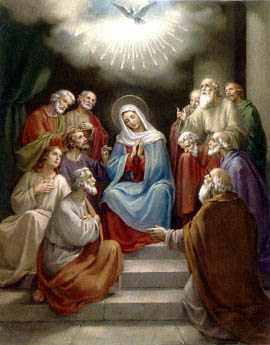 With the Mother huddled,
Consoled by her sure spirit.
Keenly they did listen,
To welcome the Advocate.

Courage they still needed,
Hoping not to disappoint.
The still sad world waited,
The grace they would soon anoint.

Mary's stories calmed them,
As their Risen Lord proved true.
Love of God the Father,
New hearts about to imbue.

In fasting and in prayer,
Sharing all that they did own.
These humble souls did trust:
Praise the Lord upon his throne!

Come, Holy Spirit, fill the hearts of your faithful
and kindle in them the fire of your Love--
DDS

Why Jesus' Ascension Makes all the Difference


It seems rather confusing: A Thursday celebrated on a Sunday. A historic fortieth-day event observed on the forty-third day. A pivotal moment in salvation history which might seem somehow superfluous.

Why is does the Risen Lord apparently abandon his disciples to return to the right hand of the Father?  Wouldn't the whole "Jesus, I trust in you" thing be so much easier if Christ was still appearing to his disciples--greeting them on their journey of life, eating and drinking with them--as he did with Mary Magdalene and Peter and Thomas and the rest of the growing Church?

This event stands as the theological corollary of the Incarnation: The eternal Word, the Second Person of the Blessed Trinity, who humbles himself to take on our humanity, now glorifies our humanity by returning it to the right hand of the Father. First, eternity enters time, the Infinite takes on finite form;  then, with the Ascension, Christ raises the finite and temporal into the realm of infinite and eternal life.

St. John wrote that "What was from the beginning, what we have heard, what we have seen with our eyes, what we looked upon and touched with our hands concerns the Word of life--for the life was made visible; we have seen it and testify to it and proclaim to you the eternal life that was with the Father and was made visible to us" (1 Jn 1:1-2). With the Ascension, what had been visible in the person of Jesus Christ now returns to the invisible realm of divine glory. The Word of life thus opens for us "access to the 'Father's house,' to God's life and happiness" (CCC, n. 661).