Our Trio of Heavenly Helpers

Almighty God is God, of course--so infinitely grand and expansive that billions of stars move and have their being within him, so infinitely small and still that he is closer than our inmost selves. Therefore, we can always to “straight to the top” with any and all of our needs.

However, in the wisdom of God’s loving plan since the dawn of time, his angels stand ready to help us on a moment’s notice.  Among these special “helpers,” the most powerful and most revered are the three archangels whom the Church celebrates on September 29th:  Michael, Gabriel, and Raphael.  Though they often act without being noticed, we can catch glimpses their respective missions: 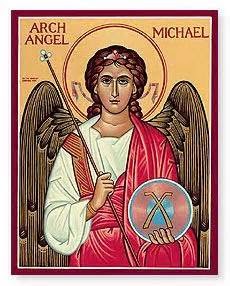 Michael:  The Warrior, who leads the battle against Satan and his minions.

Have you ever seen the face of the Evil One in the contorted look of someone intent on doing you harm, or in the pained look of someone enslaved in their evil?  If so, the mere mention of Michael’s name is enough to terrify this enemy.  Indeed, the St. Michael Prayer is one of the Church’s most powerful in its arsenal of resources.  It reminds us that our life is a matter of spiritual warfare: “St. Michael, the Archangel, defend us in battle”!

"Have in you the same attitude
that is also in Christ Jesus."
(Phil 2:5)
Maybe it's just me, but it seems like I miss a lot of opportunities to evangelize.
Don't get me wrong, if someone is asking an authentic question, I've got not problem talking about the faith handed down to us from the Apostles, or waxing poetic regarding the fact that God is Love.  But it seems like there are so many other moments when I could be doing a better job of witnessing to the reality of God's self-revelation in Jesus.
So, inspired by a few recent events and experiences of my friends and family, I plan on adding the following phrases into my regular repertoire at the start of this new school year:
Read more »
Posted by Unknown at 2:39 PM

Few issues are as emotionally sensitive and potentially divisive among Catholics as homosexuality.

There is, however, a third voice which has up until now remained largely voiceless.  It speaks with credibility about a way beyond these polarized alternatives.  Indeed, this "third way" gives voice to men and women who have embraced both their homosexual orientations and their call to live the Gospel.

If your mind and heart is open to hearing about the real struggles and profound insights of this new voice in what too often seems like a tired and tiresome discussion, make a plan to set aside 30 minutes to watch The Third Way.  Please don't judge it until you've seen it, and please stay open to the possibility that there is indeed a way forward for all of us on the topic of homosexuality and the Catholic Church. 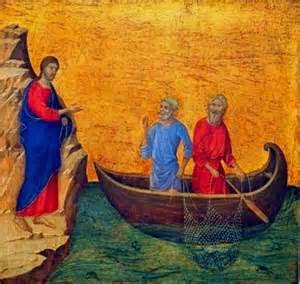 Let’s face it, we're all in the same boat.

Moreover, as G.K. Chesterton noted, "Not only are we all in the same boat, but we are all sea sick"!

Our personal sea sicknesses may differ.  They might be self-inflicted, or the result of decisions by people we love; they might involve illnesses, troubled relationships, problems at work or school.  Regardless of its specific details, every type of seasickness has the same remedy--discipleship rooted in a personal encounter with Jesus.

In other words, once we recognize that we are all "in the same boat," the question becomes whether we will allow Jesus into our boat.  Luke's Gospel recounts a scene which needs to be replayed in each of our lives:  With the crowd pressing in to hear the word of God, Jesus climbs into Simon's boat (Lk 5:1-11).  Already tired from a full day of fishing, Simon was washing his nets.  He was finished.

Yet perhaps Simon knew, deep down, just what kind of boat he was in.  Clearly his heart was open just enough to be touched by Jesus' next request, "Put out into deep water and lower your nets for a catch."  Thus the next question for us becomes:  Will we dare to face the deep waters?  Will we trust Jesus enough to lower our nets again--perhaps in a place where we've never fished before?

Toward an Economy that Serves 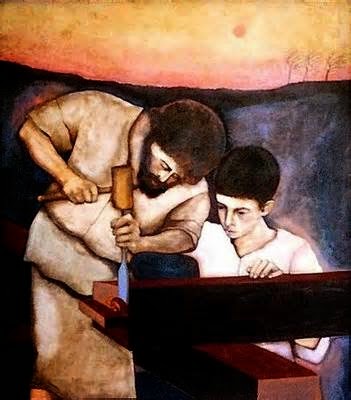 TV coverage of Notre Dame's home football games are punctuated by inspiring promotional pieces for the university titled, "What would you fight for?"  Following Labor Day 2014, perhaps the question worth exploring is, "What would you work for?"

Many of us would likely answer, "For my family" or "For my future" or "For my economic independence."  However, economists of all stripes--along with many politicians--would suggest in a variety of ways that we work to serve the economy.  Whether they tend more toward free-market capitalism or state-controlled socialism, the powers-that-be want to frame human work in terms of whether or not it serves national or international economic growth.

Catholic social teaching offers a more "personalizing" vision for human work: We work "for" the building up of the human person.  Indeed, on its deepest levels our work reflects the work of God himself, who creates, redeems and sanctifies.  In a powerful section entitled "Economic Activity and Social Justice," the Catechism of the Catholic Church emphasizes that "Economic life is not meant solely to multiply goods produced and increase profit or power; it is ordered first of all to the service of persons, of the whole man, and of the entire human community" (n. 2426).

Even as he simultaneously offered a profound critique of Marxism, St. John Paul II also incorporated insights from Catholic social teaching in his carefully qualified criticism of global capitalism.  In his encyclical Centesimus annus, John Paul asks whether capitalism is the answer for Third World countries; he then answers, "if by 'capitalism' is meant a system in which freedom in the economic sector is not circumscribed within a strong juridical framework which places it at the service of human freedom in its totality, and which sees it as a particular aspect of that freedom, the core of which is ethical and religious, then the reply is certainly negative" (CA, n. 42).  The economy must serve the human person, not vice versa; economic freedom must serve human freedom more deeply understood, in the sense of the ability to choose what is true and good and beautiful.