From Transfiguration to Assumption 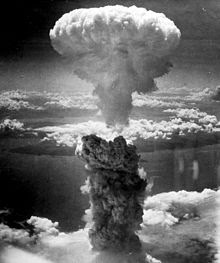 In August, several key moments in the Church's liturgical calendar collide with tragic historical events from the 20th century--Eternity breaking forth into Time, on various levels.

Maybe you are better with dates than I am, but I never realized that the United States dropped the first atomic bomb on the very feast of the Transfiguration of our Lord.  On 6 August 1945, the world watched in horror as tens of thousands of innocent civilians lost their lives.  Natural forces were unhinged, and the terror of raw power was unleashed.

And yet, on that same day each year, the Church commemorates the experience of three humble disciples who glimpsed the glory of the supernatural reality which would ultimately change human history.  They looked upon Eternal Life, present in the temporal person of Jesus of Nazareth,  And they heard the voice from the heavens say, "This is my chosen Son; listen to him" (Lk 9:35).  Peter, James and John knew that they were in the presence of the Power who created the cosmos itself.


+++++++﻿
The Transfiguration and the dropping of the Bomb confront us with a fundamental decision:  Will we choose a world view rooted in Eternity, or one tied only to Time?  In other words, will we embrace the eternal horizon which guided the first Christians, or will we choose the temporal horizon which is characteristic of all those who seek to build worldly empires?

Adopting Eternity as our horizon.  The disciples gradually came to understand that Jesus' Transfiguration was inextricably linked with his Passion.  On Mt. Tabor, the Lord spoke with Elijah and Moses about the "exodus that he was going to accomplish in Jerusalem" ( Lk 9:30)--his passing through death into Life.  Adopting an eternal perspective on life, therefore, helps us understand that love ultimately requires a laying down of our lives, so that others might live.  The guiding motto is clearly "thy Kingdom come, thy will be done."

Adopting a merely temporal perspective.  If we refuse to live with Eternity as our horizon, then Time begins and ends with us.   Such a worldly mentality inevitably leads to taking the lives of others, so that we might live as we like here and now.  Empire builders of all stripes quickly justify the killing of the innocent, in the name of "our" higher cause or the good of "our" people.  They rationalize pre-emptive military strikes and employ weapons of mass destruction, in order to impose "our" will on the present historical moment.  The motto is basically "our kingdom come, our will be done."

We see the implications of this choice between an eternal and a temporal perspective in the lives of two World War II martyrs who also have August feast days--Teresa Benedicta of the Cross and Maximilian Kolbe.  These heroes of the faith went to their deaths in the Nazi concentration camps precisely because of their devotion to the transfigured, crucified and risen Christ.  As the Nazis pursued their own flawed reasoning and twisted vision of human history, St. Teresa Benedicta and St. Maximilian were willing to lay down their lives for the sake of a Kingdom which is not of this world.

While a worldly and temporal mentality believes that "might makes right," the disciple who is called to witness knows that Love alone has the power to transform the world.  But for this to be so, we Christians must allow Love to transform and transfigure us.  We must surrender our pretensions to self-determination, in order to say "yes" to God's will.  We must let the light of Christ shine through us, in order to let God "take up" our frail humanity.

And so, on August 15th each year, the Solemnity of the Assumption celebrates not only Mary's unique role in salvation history, but also the destiny to which the Transfiguration points.  As the Book of Revelation puts it, "A great sign appeared in the sky, a woman clothed with the sun, with the moon under her feed, and on her head a crown of twelve stars" (12:1). The Blessed Virgin Mary stands as the "great sign" pointing us to her divine Son, once Transfigured and now Glorified.  She intercedes on behalf of all of us who long for a Kingdom free from any form of ideological domination.  She also signals to the resurrection of the body and the return of all of creation at the end of Time.


+++++++
The month of August reminds us that the Eternal One stands ready to transfigure our daily lives, in order to assume us into the true Home for which we were created.  Empire-builders will speak of the "will to power" (e.g., because we can do X, therefore we should do X).  And ideologies will strive to universalize one group's experience and then to impose it on others.  Let's stay alert for such merely temporal mentalities, in order to (re)direct the conversation to Christ.

After all, He is the one who redirects all of reality back to its origin and rightful destiny.  The salvation revealed in Jesus Christ is stronger than any ideology, and more powerful than any atomic weapon. 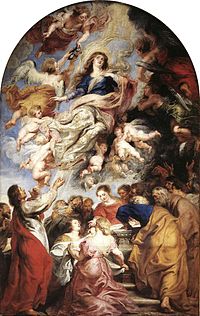